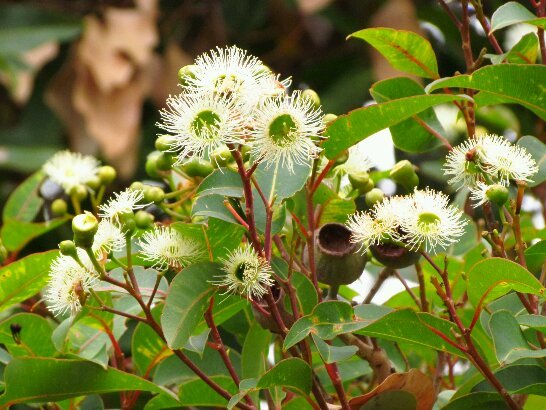 In this blog series, we look at the indigenous trees in the Peel/Bindjareb region. This month we profile the Marri, or Corymbia calophylla.

The common name “Marri” comes from the Nyoongar word for blood, referring obviously to the red sap that often stains the tree. The large urn-shaped fruits house large seeds which are eaten by parrots and cockatoos. Commonly called “honky nuts,” the mature fruits were used by WA children in times past to throw at each other or hit with a bat. They also became the fictional homes for tiny gum nut babies in May Gibbs’ iconic Snugglepot and Cuddlepie stories. Marri trees produce an abundance of fluffy cream flowers at summer’s end, and there is even a pink-flowered form. The beautiful timber is used in fine furniture making and as flooring.

One thing to look out for if your garden is large enough to accommodate a shady Marri tree is signs of the Marri canker (Quambalaria coyrecup). This native fungus attacks the stems and while there is no cure, pruning off the affected parts can prevent it spreading to the rest of the tree.